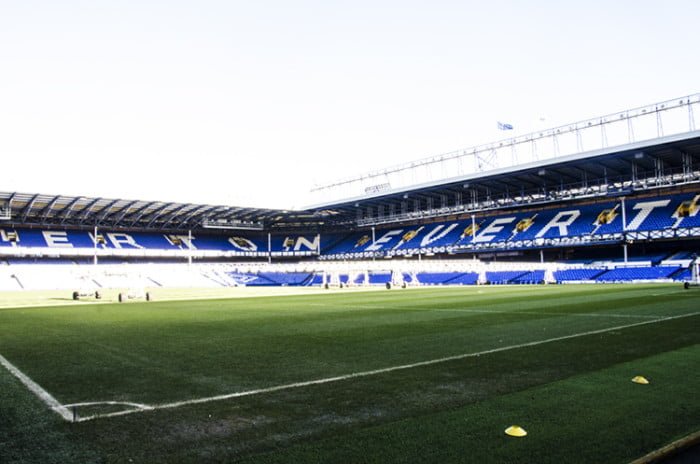 IT seems to be a fact of life that we take many things for granted and miss them when they are gone. Before the advent of social and online media, independent football fanzines provided a valuable platform and forum for supporters to express their views about the highs and lows of their club.  The homespun publications were usually a labour of love, created on a shoestring budget in back bedrooms, the work of a passionate few for the enjoyment of all.

Everton fan Tom Moore remembers the joy of catching up with the latest issue of favourite fanzines, especially When Skies Are Grey and Speke From The Harbour.

However the power of social media and online publications sounded the death knell for many print fanzines. Fans like Tom were left without an independent print publication to buy on their way to the game.

When Tom followed Everton to Tanzania for pre-season matches in summer 2017, he wanted to report on the experience and share it other fans. This sparked a wild idea to create a new monthly Everton fanzine in print. ‘It was a complete stab in the dark” remembers Tom. ‘I took a leap of faith and wrote the whole thing myself.  I paid for the printing of 150 copies, decided to sell them for £2.00 each and just hoped for the best. They all sold out, so I carried on, more people wrote in with articles, and the rest is history.’

Finding a name for his new publication was the most difficult part. ‘I work in higher education; I know the importance of a good title for any piece of written work. I toyed with a few ideas and most of them were rubbish. Then I hit on The Black Watch. It’s a nod to Everton’s history.’ Back in the day when players were permitted to wear shirts of different colours, Everton united the team by dying the players’ shirts black and adding a red sash. The sash element of the new look loosely echoed the uniform of the Highland Black Watch regiment and a club nickname was born.

Tom regards The Black Watch fanzine as a democratic forum. ‘There’s room for a range of opinions. It’s not about me; it’s about contributors with something authentic to say. There’s plenty of satire and quality artwork too.’ 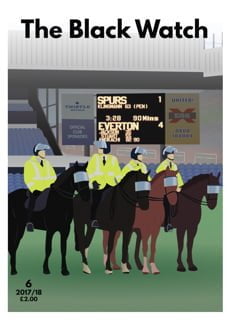 The eye catching covers of the fanzine have become a significant aspect of its identity. Artwork inspired by the 1995 FA Cup semi-final features on a highly collectable Black Watch T-shirt which is available online.

Tom donates 50% of the sale of T-shirts to The Whitechapel Centre homeless and housing charity for the Liverpool region. ‘I’m not in this to make money’ he explains. ‘It’s definitely a labour of love and can be a financial risk for me. I edit, write and fund the print run, then I just have to hope I sell enough copies to recoup my costs.’

Tom’s sales pitch is the traffic island long associated with Everton fanzines of old. ‘The old fanzines were the inspiration for me’ he explains. ‘I used to read and write for them myself. I think it’s important that clubs retain a print fanzine that they can buy on a matchday and read at their leisure.’

Tom hopes The Black Watch has a promising future. ‘I’ve increased the print run and I’ve got subscribers in a few countries now, plus my dad and my nan!’

He’s getting used to selling the fanzine in all weathers at home games. ‘I have been soaked to the bone but it’s worth it. ‘ Sometimes he is mistaken for a match day programme seller. ‘When someone asks if it’s the match day programme I explain it’s a fanzine. Some stop and buy one, some just walk on by!’

He’s noticed that sales are better when kick off is at 3pm; games switched for television at late notice can cause havoc with sales plans. Tom’s produced 8 issues of The Black Watch so far and each is effectively an historical record of the club and its fans. If you are interested in being part of this blue revival, subscribe to The Black Watch at www.theblackwatchfanzine.bigcartel.com or look out for Tom at home games. If you’d like to join him selling The Black Watch he’d love to hear from you! 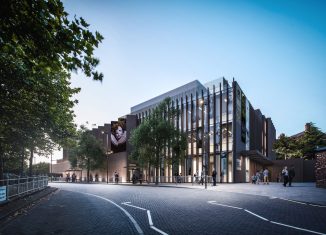 July 7, 2020
AS anticipation continues to build around the creation of The Shakespeare North Playhouse in Prescot, everyone now has a chance to play their part...

July 2, 2020
THE UK’s longest running Arab arts festival opens a door into Arab arts and culture as it goes digital for the first time in...