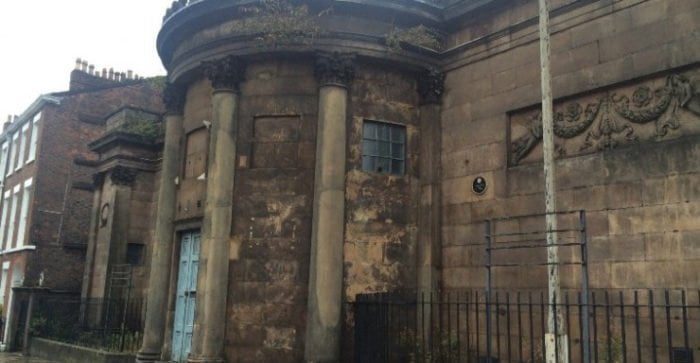 LIVERPOOL’S historic Wellington Rooms is to undergo urgent works in order to arrest the decay of the 202-year-old building.

The Grade II* listed landmark, which sits within the city centre’s Knowledge Quarter on Mount Pleasant, has been closed since 1997 and is suffering from a leaking roof and dry rot.

The urgent repairs, which are being jointly funded by Liverpool City Council and Historic England, will start on Monday, 12 February and are expected to take six weeks to complete with plans for a full restoration also underway.

The neo-classical building, which was originally used for high society dance balls and latterly as the city’s Irish Centre, also lies within the buffer zone of Liverpool’s World Heritage site and is recognised by the city council and Historic England as Liverpool’s top priority heritage building at risk.

Plans were initially approved for the Wellington Rooms to become a function suite in 2002 but were never implemented. An application for it to become a hotel in 2006 and 2007 were rejected because of the detrimental impact of a three storey extension, and throughout this period the building was deteriorating.

The contract to carry out these urgent repairs and secure this important heritage asset has been awarded to Quadriga who are one of the leading UK specialists in the conservation, restoration and structural repair of historic buildings having worked on the British Museum, the Royal Opera House at Covent Garden and the Royal Liver Building.

While the repairs take place Merseyside Building Preservation Trust is also consulting with local shareholders and businesses on the results of an options appraisal of the building and, in partnership with Liverpool City Council, is hoping to secure a development partner by the summer to oversee the full restoration of the building.

Deputy Mayor of Liverpool, Councillor Ann O’Byrne, said: “The Wellington Rooms are right at the top of our priority list for action. It has an amazing history and is hugely important to the people of Liverpool. These urgent repairs are the start of a long journey to return it back to its former glory, but we are now starting to make progress in working with partners to identify a deliverable a sustainable end use.”

Charles Smith, North West Assistant Planning Director and Heritage at Risk Principal Adviser at Historic England, said: “Historic England is delighted to be co-funding these urgent repairs to the Wellington Rooms, which is in the top 8% of the most important historic buildings in the country. As a much-loved venue for weddings and events, it has featured in the lives of many Liverpudlians over the past 200 years. These repairs will stop further decay and help to bring about a new use for this quality building that the city can be proud of.”

Bill Maynard, Chair of the Wellington Rooms Steering Group and Merseyside Building Preservation Trust, said: “The Wellington Rooms Steering Group was set up to secure the restoration and future use of the former Irish Centre, an options appraisal has been completed and these repair works represent a major step forward and will protect the fabric of this important and much loved historic building.”

Liverpool City Council’s “Buildings at Risk” programme continues to be the most successful project of its type in England – with a 75% reduction in ‘at risk’ buildings in the past decade with St Luke’s – aka the bombed out Church – the most recent to be refurbished.

A recent survey has also shown that almost £750m has been invested into historic assets within the city’s World Heritage Site including the upgrade of 37 listed buildings since 2012, 18 with council financial assistance.

Councillor Alice Bennett, Mayoral Lead for Heritage and Design, said: “Liverpool’s track record in refurbishing its historic assets is second to none. The city council is deeply committed to preserving our built heritage and ensuring the buildings continue to be of benefit to the community.

“The Wellington Rooms has a steering committee that comprises some of the best heritage expertise in the north-west if not the UK. We are lucky to have such a committed team and I’m confident the plans to revive this amazing building will soon be realised.”

April 14, 2021
GB Olympic medallist Beth Tweddle is set to launch an industry-leading gymnastics programme at Childwall Academy– just four miles from where her career as...