IT began as a joke between five mates from Liverpool Uni and was never really meant to graduate to anything more.

But now, five years later, Ukebox has a worldwide fanbase and is, quite possibly, the first – and only – ukulele boy band!

The band is made up of Liverpool’s Mikey Fell and James Rookyard, James Wilkinson from Crewe, Danny Gelsthorpe from Winsford and Scott Griffin from Hull.

They all met while studying music and, after seeing the Ukulele Orchestra of Great Britain, decided to have a go themselves.

“We invited our friends down who we thought might be interested, expecting about 20, and only five of us turned up!” laughs Mikey. “But one thing led to another and what started as just a university project blossomed into a full-time career.”

Mikey says none of them had ever played the uke before, but it proved quick and simple to master. “It has a distinctive sound, but to be totally honest we just wanted something cheap and fun to do in uni, plus ukuleles didn’t take up that much space in our dorms compared to a guitar or drums!”

The five bought their first ukuleles from the music shop in Liverpool where Mikey worked. “They were about £10 each, and we worked our way up the ranks of quality. We started doing open mic nights around the city, then put the money towards better equipment.”

The friends, now in their mid and late-20s, graduated in 2013 and became a full-time band in 2014. Starting out with pubs and clubs, and as wedding entertainers, Ukebox now regularly play on cruise ships and have gigs across the UK and further afield.

“We were lucky enough to go to the South Pacific Islands and Hawaii and our music went down an absolute treat there,” says Mikey. “I think they’re so used to hearing typical ukulele bands, 10-15 strong all strumming a very simple tune, but we’ve taken it in a completely different direction.”

Along with cover versions, the Ukebox members are now writing their own original songs and hoping to play more festivals.

“When we first started I was the one calling round for gigs and as soon as you say ‘would you like a five-piece ukulele boyband?’ the phone goes dead!” laughs Mikey. “People often think they know what a ukulele sounds like, but we’ve got hip-hip songs, funk songs, pop songs, so we’re never what they expect.”

They’ve already released their first single and plan more original material over the next few months.

As for the godfather of the ukulele, George Formby, Mikey says: “It’s not our scene but he undeniably made the ukulele what it is so we give a little nod to him every time.” 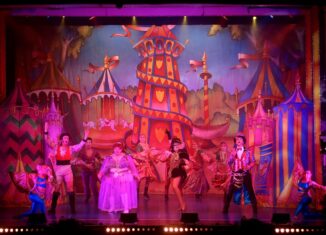