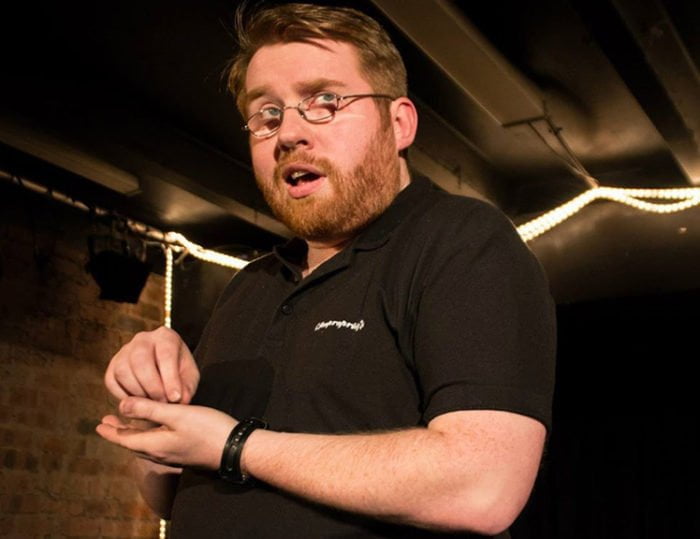 AN artist, known for his extreme improvisation, will create 300 characters in 300 minutes during a one-off Liverpool charity performance this month. Trev Fleming, a professional actor and improviser from Newry, Northern Ireland, will use his talents in a six-hour long show where guests can choose to sit-in any of six 50-minute-long episodes. Each episode will see Trev create a unique string of characters from one word requests given by the audience in a completely improvised immersive experience that will raise money for North West Cancer Research. The performance, backed by improvised theatre company, Impropriety, will take place at the arts and music venue, 81 Renshaw in Liverpool on Sunday 30 July between 15:00 and 21:00. Besides his acting skills, Trev is also a professional voiceover artist and can currently be heard as the voice of the Discovery Channel’s Shark Week promos. This will be the second-time Trev has performed his 300 show. In 2015 he sold more than 100 tickets and raised £850 for North West Cancer Research. After losing his mother to breast cancer when he was just seven years old, fundraising for cancer research in his home town of Newry in Northern Ireland became very important to Trev. Years later at age 22, Trev also lost his father to lung cancer which fuelled his determination to raise money for life-saving research. Trev said: “Losing both parents to cancer was tough, but if it’s taught me anything it is how important raising money for cancer research is. Since my mum died 28 years ago, cancer research has come such a long way and more people are surviving and living longer with the disease than ever before. “My show is something that people can watch and have a good time whilst raising money for a good cause. The audience thoroughly enjoyed the last show and it was great to see them engaging with me and challenging me to create some interesting characters.” North West Cancer Research funds cancer research across the North West and Wales, including at nearby University of Liverpool. The charity has committed to funding more than £13million worth of research over the next five years. Bobby Magee, Fundraising Manager, North West Cancer Research, said: “When Trev came up with the idea for the improv show I thought it was a great idea. The last show was really unusual and unlike any kind of fundraising event we’ve had before. I’m sure this event will go just as well if not better than the last one, and we hope Trev ‘breaks a leg’.” Tickets are only available on the door and cost £3 per episode or £12 for the entire show – it is a cash only venue. For those who can’t make the show, they can still support North West Cancer Research by making a donation to Trev’s Just Giving page: https://www.justgiving.com/fundraising/trevfleming For more information on the event, find out more on the Facebook event page here
Tweet
Follow @GoodNewsLpool