by Nigel SmithEPSTEIN Theatre audiences will be familiar with Daniel Taylor for his appearances in Lennon, Through a Glass Onion and The Tommy Cooper Show, and he now returns as producer, director and performer in this, the first Shakespeare to appear at the venue.As Polonius tells us in Hamlet ‘brevity is the soul of wit’ and this adaptation of Shakespeare’s much loved but often lengthy comedy manages to come in at under 2 hours. It’s not just Theseus and Hyppolyta’s nuptial hour that draws on apace in this version, with the whole thing driving onwards through the story so fast that we barely notice the sections of text that have been cut in this adaptation by Helen Jeffrey.This is a work that can easily feel constrained if played on a proscenium stage, but Taylor has cleverly schemed to draw the audience into the story by using the entire auditorium, with entrances and exits from every angle. Especially effective is his placing of the ‘onstage’ audience for the mechanicals’ tragedy of Pyramus and Thisbe in the theatre’s gallery behind us all, thereby making us complicit in the storytelling.What is refreshing to see from an actor/director Taylor does not insist on centre stage for himself, and while he does bring wit and charm to his Bottom he doesn’t overplay the part, allowing his cast to shine as an ensemble. The central love quartet of Helena, Hermia, Demetrius and Lysander are splendid, with a particularly noteworthy turn from Chloe Taylor as the increasingly confused Helena.The show-stealer here though is James Templeton, whose truly nimble Puck seems to emerge from every corner and weaves himself in and out of every situation. Glad to see that he still has apparently boundless energy despite having completed the London Marathon last Sunday in significantly less than 4 hours.A simple but effective set design from Sean Gibbons has a translucent rear cloth, behind which it was possible to discern the accompanying band, some of whom double as players in the action too.Whilst at times the speed of delivery whizzes a little too fleetingly past some of the major plot points, the production has an abundance of humour and charm and has been lovingly put together.A Midsummer Night’s Dream is at the Epstein until Saturday 29th April.
Tweet
Follow @GoodNewsLpool 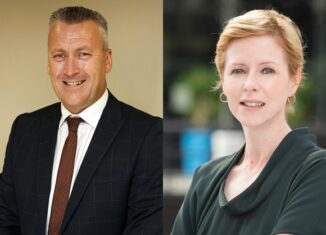 December 1, 2021
LIVERPOOL City Region Combined Authority has appointed to two key leadership roles.Richard McGuckin has been appointed to the role of executive director place, while...

Russell Watson confirmed for Chicago at the Liverpool Empire