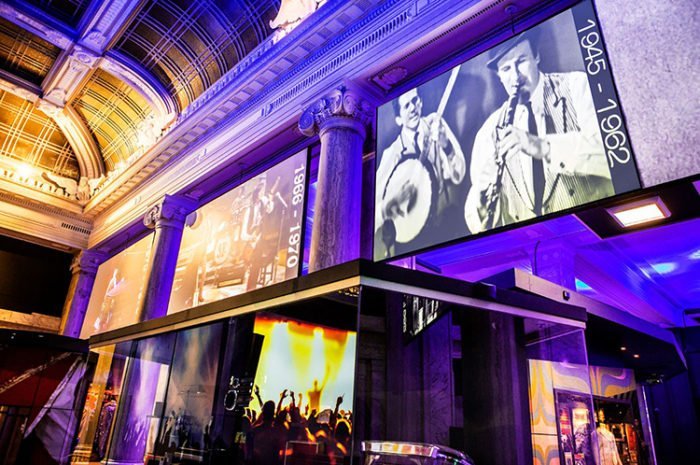 THE British Music Experience – the UK’s new national museum of popular music –  which opened in March at Liverpool’s Cunard Building, is encouraging younger people to visit over the Easter holidays.The attraction recently launched an activity book called ‘Following in The Footsteps of Icons’ which helps younger visitors interact with the artefacts on show. They’re encouraged to work with their family and the BME crew to follow the timeline from 1945 right up to the present day answering the questions and finding out fun facts. Featured in the activity book are a series of family characters illustrated by Geo Law.Also, especially for Easter, they are running a competition to find the best designed album cover. From Tuesday 11th April through to Sunday 23rd April, they’ll have a workshop set up for all young rock stars to take part. The crew will be on hand to help (probably wearing bunny ears) and to add inspiration and encouragement. The winning album cover will selected on the close of day on the 23rd and the successful designer will win a BME goodie bag, along with a family ticket and pair of passes to one of the summer workshops.Housed in the first-class passenger lounge of the iconic Cunard Building, is a hugely enjoyable, innovative and interactive journey through popular music from the end of the Second World War to the present day charting musical milestones from the birth of rock and roll through the punk revolution to pop icons like The Spice Girls.The priceless collection of music memorabilia includes over 600 artefacts that played a part in some of the most pivotal moments in musical history from The Beatles through to Adele, various outfits from throughout David Bowie’s career, Spice Girls costumes and one of the most recognisable instruments of the Brit Pop era – Noel Gallagher’s Epiphone Union Jack Sheraton guitar.Other new items on display include items belonging to rock n roll pioneers and huge influence on the proto UK rock scene – Buddy Holly and the Crickets – such as Buddy’s famous ‘London Fog’ jacket and Lifetime Achievement Grammy award – there are also original programmes from Buddy Holly and the Crickets 1958 UK tour including ticket stubs from Bradford Gaunt Theatre.Tickets on sale here:  www.britishmusicexperience.com Tickets Hotline – 0344 335 0655
Tweet
Follow @GoodNewsLpool