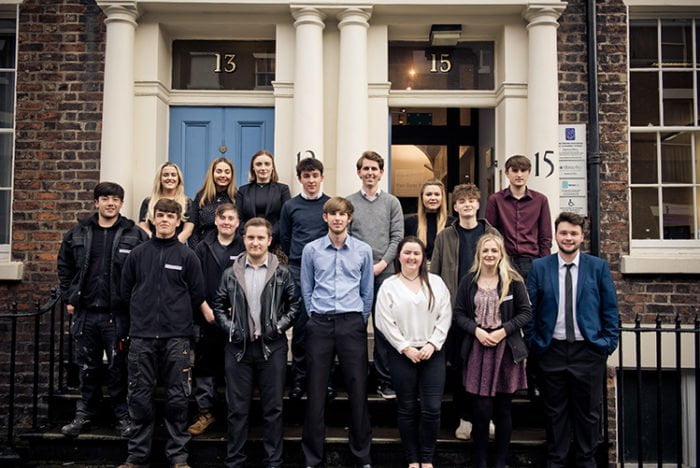 AS part of its commitment to providing meaningful employment and career opportunities for those wanting a vocational route into a career, apprentices will comprise five percent of the workforce at Plus Dane Housing after the organisation announced it will be creating more new roles this year.Marking National Apprenticeship Week (6-10th March), the Merseyside and Cheshire-based housing association has announced it is planning to take on up to another 10 apprentices later this year, which means the workforce will include nearly 30 new apprentice roles created over the last twelve months alone.Plus Dane recognises that apprenticeships offer genuine life-changing opportunities, and is committed to providing an alternative route to higher education, with chances for young people to be able to earn while they learn, whether in traditional trades roles or office-based positions.As part of this, Plus Dane is a proud member of The 5% Club, an industry-led campaign in which members strive to achieve 5% of their workforce consisting of apprentices, sponsored students and/or graduates on formalised training schemes within five years.Last summer, after advertising for 10 apprentices, it took on a record 18 apprentices and will be seeking to create up to 10 more apprenticeships in 2017 and take on five graduate trainees. Along with existing apprentices already training with the 700-strong employer, this 5% target has been reached well ahead of schedule.Minister for Apprenticeships and Skills Robert Halfon congratulated Plus Dane for its commitment towards creating apprenticeships, and said: “National Apprenticeship Week is the highlight of the apprenticeships year – it showcases the best of the best and celebrates the positive impact apprenticeships and traineeships have on learners and employers. There really has never been a better time to be an apprentice. I congratulate Plus Dane Housing for getting involved, giving people a chance to climb up the career ladder and get on in the world of work.”Plus Dane Chief Executive Barbara Spicer said: “Plus Dane’s Board level commitment to apprenticeships is something we are really proud of as a business, and we are delighted to support National Apprenticeship Week with our announcement that we’re planning another big recruitment drive.  We have recruited some remarkable young people over the last twelve months who have not only made a difference to the dynamics of the organisation but genuinely have the potential to be future leaders. The quality of applicants has been of an exceptional standard.”In addition, it is now Plus Dane policy that all entry-level jobs are apprenticeships, to ensure that even more young people can benefit from an alternative route to higher education and make a valuable contribution to the business across all teams, from repairs and maintenance to corporate services, HR, IT and property.Reaching this milestone has coincided with National Apprenticeship Week, co-ordinated by the National Apprenticeship Service and designed to celebrate apprenticeships and traineeships and the positive impact they have on individuals, businesses and the wider economy.The theme for National Apprenticeship Week 2017 is ‘Ladder of Opportunity!’- focusing on the progression routes of apprenticeships, from traineeships through to higher and Degree apprenticeships. This year also marks the 10th anniversary of National Apprenticeship Week.
Tweet
Follow @GoodNewsLpool