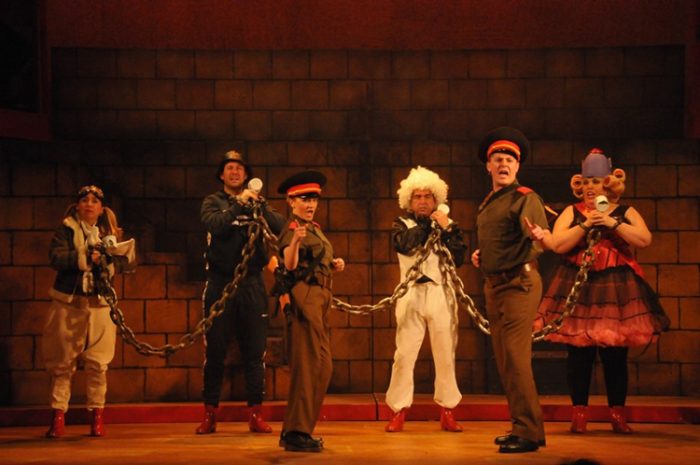 THERE may be some changes in the team for the Royal Court’s Christmas show this year, but with eight familiar faces onstage you can hardly see the join. Executive Producer Kevin Fearon has taken over from regular writer Fred Lawless to create a script that continues the themes and flavour of previous years’ shows, but offers an opportunity to freshen up the formula. You might say it’s the same recipe cooked by a different chef, and what we get is familiar fare with slightly different seasoning. Regulars will be delighted to see the return of Boris and Daisy, played again by Michael Fletcher and Hayley Hampson. This year they turn up behind the check-in desk at Liverpool Ono Airport as a motley crew of holidaymakers are heading off for the Far East. Lindzi Germain’s Clare Crow is a day behind the rest of a hen party and heading to catch them, armed with the obligatory blow-up doll. Along with Terry and Tony (Michael Ledwich and Jake Abraham) she finds herself bundled into a budget airplane with Keddy Sutton’s Carrie Oke at the flight deck. Boris and Daisy turn out to be cabin crew too, and with a manic take-off scene they aim for the skies. Meanwhile Alan Stocks creates a pompous, disaffected thespian, Kim Young, who has a dastardly plot to destroy Liverpool, in revenge for nobody taking him seriously as an actor. He aims a nuclear missile at the city but, of course, when it’s sharing the same airspace as our friends’ aircraft things are bound to get complicated. Landing in very much the wrong country, and with Clare Crow wearing an unusual piece of headgear, they have to run the gauntlet of a mad dictator to find a way of saving Liverpool and getting back home. Opportunity here for some nifty parallels with the Wizard of Oz. Throughout all of this Andrew Schofield brings us a series of increasingly bizarre characters. He and Stocks have much of the best material and a lot of the funniest lines, and both give extremely sharp performances. Schofield actually manages to deliver an entire scene with just his head visible through a trap in the stage floor, a challenge usually reserved for some of Samuel Beckett’s actors. Lindzi Germain is frighteningly realistic as the uninhibited partygoer, for whom the hen party has begun before she even arrives at the airport. A small onstage band accompany the cast with a lively score, and also add some great vocals. Particularly noteworthy are some of the musical numbers for Michael Fletcher and Hayley Hampson who are in very fine voice, especially in a splendid ballad they deliver as a duet. Keddy Sutton and Michael Ledwich too are great vocalists, although their opportunities to demonstrate this were all too fleeting. The set by regular Royal Court designer Foxton makes excellent use of the stage and as always performs a few visual stunts of its own. Followers of the annual tradition at the Court will not be disappointed by this year’s instalment, which has the audience roaring with laughter and leaping to its feet at the end. Scouse of the Rising Sun plays at the Royal Court until 14th January. Review by Nigel Smith
Tweet
Follow @GoodNewsLpool