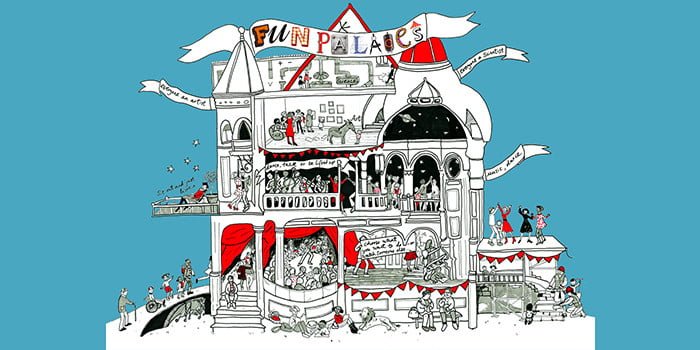 ON Saturday 3 October the Everyman theatre will take part in a nationwide initiative in tribute to theatre director Joan Littlewood, to mark what would have been her 101st birthday, by transforming itself into a Fun Palace. Last year’s inaugural event was a huge success and this time the Hope Street venue is bringing back a series of interactive activities including contributions from Young Everyman Playhouse, the Science Choir, Crisis, 20Stories High and Liverpool John Moores University.

The Fun Palace was conceived by Littlewood and architect Cedric Price in 1961 as a new kind of cultural space where theatre buildings would cease to be intimidating edifices and where cultural experiences, both high and low, were possible. The Fun Palace concept embraced more than just theatre performances, its ‘big tent’ included song and dance, construction and mechanics and scientific experiments.

This year the theatre’s Fun Palace will focus on the scientific element of Littlewood’s Fun Palace. In Ev1, inspired by the latest production The Odyssey: Missing Presumed Dead, an immersive experience looking at oceanography, the science of the sea. Running from 10am to 1.30pm it introduces some of the key themes of the production and gives a glimpse into some of the mythical creatures of the sea whilst learning more about life under the ocean waves. Meanwhile, in Ev2, Young Everyman Playhouse explore Quantum Physics which will be the topic of YEP’s next show at the Everyman. Everyone is welcome to join in with a devising workshop with YEP Director Matt Rutter inspired by quantum physics.

In the Theatre Bar visitors will be invited to Build their own Fun Palace from 10am to 1.30pm. In honour of Joan’s dream and whilst standing in our own ‘fun palace’ we want you to build your own or contribute to one. In the Street Café from 10.00am to 4.30pm will be Science Shout Out Corner, a space dedicated to performers and scientists coming together for the day. The shout out corner will play host to a variety of experts to perform, present and even let you into a couple of smoke and mirrors secrets along the way. Each performance is 30 minutes long and includes scratch performances from Liverpool John Moores University’s Mike McCormack – ‘the magic man’, the Science Choir, Crisis, 20Stories High, Unity Youth Theatre and many more.

From 4.30pm to 7.30pm the popular Long Table Debate which debuted at Light Night this year will bring together young people, emerging artists, activists, social thinkers and the general public to have their say on the psychology of wellbeing. There will be a diverse range of performances which will inspire debate using music, drama, dance, spoken word, rap or comedy. This unique performance and discussion platform gives people the opportunity to get their voice heard and have their say on the Long Table.

There will also be two tours of The Everyman, at 10am and 12pm, led by the theatre’s Building Development Director Robert Longthorne. This unique backstage tour offers an insight into how the Everyman was built to be Environmental sustainable and its award winning green credentials. Tours are available for up to 20 people.

The Everyman Fun Palaces is a free event and will run from 10am to 7.30pm on Saturday 3 October. For more information go to http://www.everymanplayhouse.com/whats-on/fun-palaces